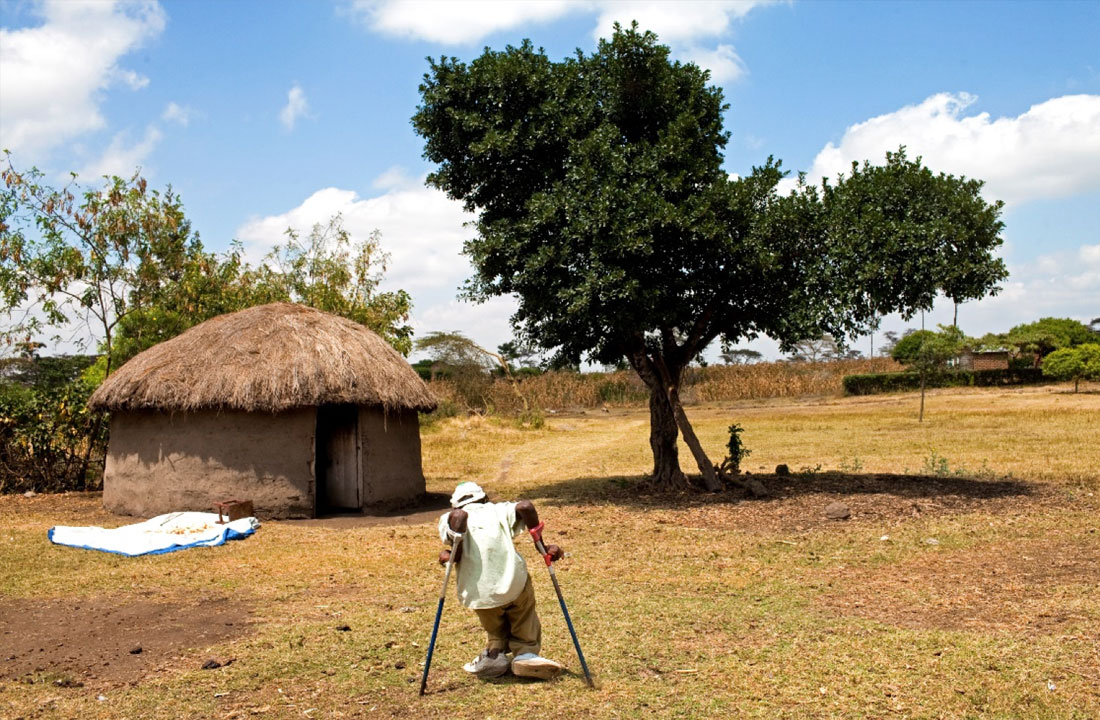 BEGIN WHERE YOU ARE

Pale yellow kernels of corn fly like confetti, as John Anaeli pushes his thumb along the dried rows of the cob. He sits on a small wooden stool on top of a white plastic tarp with small mountains of kernels that took hours to form. One kernel hits John in the eye and a broad smile stretches across his face, as his brother, Elisante, rolls with laughter. John was born in 1991, healthy and happy in a small village in Northern Tanzania named Nkoansiyo. On a clear day, Mt. Kilimanjaro can be seen from most neighbors’ homes. John started walking, before his second birthday and spent much of his early childhood playing with his older brother among grazing cows.

When John turned 5, he was no longer able to walk. After X-rays showed no developmental issues, the doctor sent them home with instructions for light exercise. The pain that started in his lower back spread to his legs. They gradually bent in to each other, and John’s height never changed. John never regained his ability to walk without assistance. At 24, he used two canes. He can’t go far because of the pain. Sometimes he has to drag himself on the ground to move. This is the result of high levels of fluoride in the family’s drinking water. The water John’s mother spent hours fetching every day leached the calcium from his bones and enlarged his skull. Like so many people in this region, John’s story is all too common.

John’s mother said, “He has special character. He is a hardworking person. He tried 3 times to go to school, but getting there caused too much pain.”

While the 24 year-old has never sat in a classroom, he has dreamed of going to school, so he can one day open his own retail shop in the village. Having a wheelchair and clean water made that dream possible. While building a rain water harvesting system for John’s family, Save the Rain discovered the need to help John gain independence and partnered with Mobility Care in Arusha to build John a custom wheelchair out of bicycle parts that resembles a handcycle. Dozens of other kids were identified in the village – all struggling with the same issues as John. All received help.

John navigates his wheelchair over uneven terrain from the new home he built for his new bride and their child to be. Though he can still see the one room home he had closer to his parents, his life has changed monumentally. He often takes shelter under a tree that offers shade from the midday sun. John is not one who likes to sit idly. His hands are calloused from years of harvesting and powering his wheelchair.

John was largely dependent on his family and so much of that has changed. Having clean water and a wheelchair is already improving his life and independence. As he struggles to get out of his chair and onto a stool, his mother says, “He never gives up, even when his sickness held him back from living his dreams.” John smiles and blushes. Then he says, “Never give up. You can start right away from where you are.” And that’s just what John did when he started primary school, in the very same year he married and will become a father.