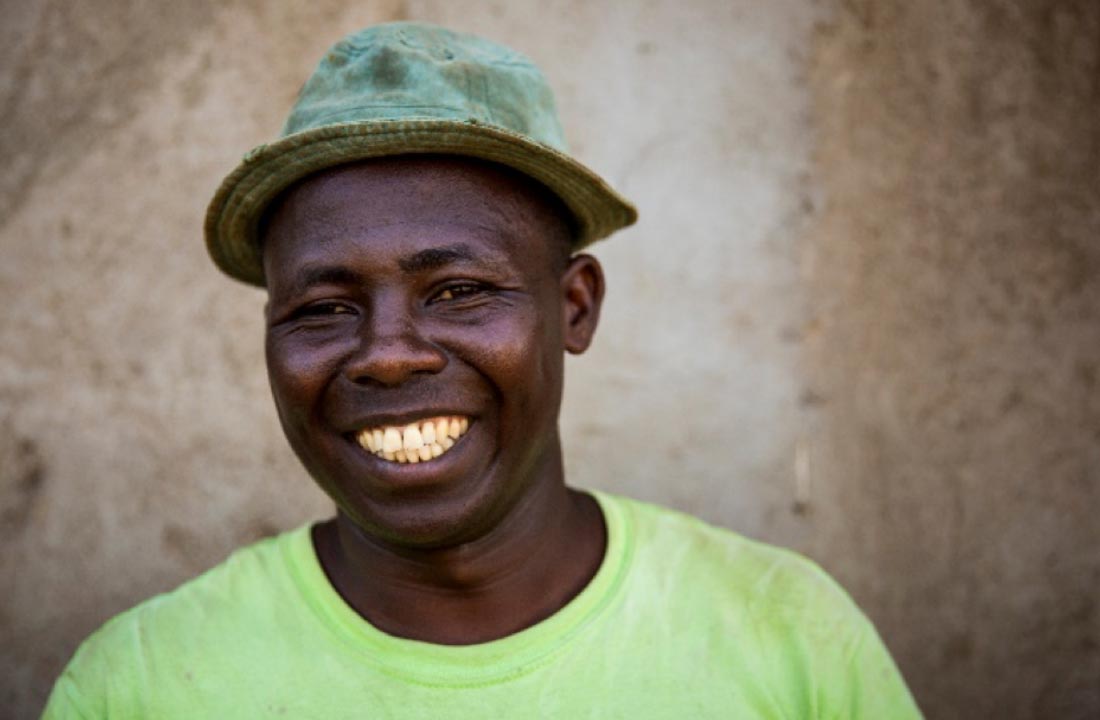 Many of these are the children he’s met, at schools and at homes, while he worked on almost 60 rainwater collection tanks.

But he’s also motivated by the children he hasn’t met yet.

These people, these plans add up to what motivates this 29-year-old mason and cook the most of all: His national obligation. His duty to the future of his country. That if he is going to work hard, he is going to do it here, at home.

It’s almost as if he feels like he owes a debt. “I see that the nation has supported me,” Hillary said.

And with each year, Hillary has learned more and more about his home.

“I’ve seen people in different villages,” he said. “I’ve learned all the challenges these communities face.”

Hillary didn’t have to learn some of these challenges. He’s survived them, already.

He suffered from bouts of cholera and typhoid – both water-borne diseases he contracted from drinking unsanitary water.

Hillary was so sick, so often, that he stayed home from school more days than not.

And when he was healthy, he wasn’t always walking to the classroom when he left home in the morning.

“I would spend three hours looking for water” for his family, he said. “I went to tap stations. Sometimes, there was no water there. Water would be available only at certain times and at some places.”

“I would have liked to continue to secondary, but my parents didn’t have the money to pay for it,” he said.

Hillary loved science. He wanted to be a teacher.

But he wasn’t a student for long enough to be a teacher. At least not formally in a classroom.

So, there were two years between his last day of school and his first day working for Save the Rain. Some 730 days when Hillary could have gotten lost like so many of his classmates who couldn’t find work quickly enough.

These boys often become men plagued by problems with alcohol, he said.

“These drunken men, all of their knowledge is in drinking,” he said. “They won’t think of anything that will expand their brain or think of their future.”

He knows these men. He’s loved people who have been killed. Who’ve gone to jail.

Hillary doesn’t want he, or his homeland, to know any more of these men.

He puts it this way.

“Everything depends on water,” he said. “Because without water, the plants will dry up. The grass will dry up. Animals won’t have anything to feed themselves. They will die out of starvation.”

When he sees the rain clouds now, he has joy “inside him.”

That’s more children who are healthier, able to focus on their education. And for Hillary, an education equals a future.

It’s what he thinks about sometimes as he’s digging a foundation, securing chicken wire, or plastering a tank in progress.

But Hillary doesn’t work alone. And just like he is motivated by the people around him, he is empowered by them, too.

“I feel good working with a team,” Hillary said. “I couldn’t do the work by myself. We cooperate together. We combine different good ideas and come up with something that is successful to society.”

And that’s what he asks of the people he’s helped and those he will help in the future: To help one another.

That they work together to build a better future for their country. For all.

“The next generation, the future nation, will be built by the kids I am helping now,” he said.